Skip to main content
August 21, 2019
A 1915 meeting between Athabascan leaders and Alaska's congressional delegate to Congress, James Wickersham, marked the first time that Native peoples of Interior Alaska voiced their concerns to a representative of the Unites States government. The transcript shows how people still adjusting to their newfound status as subjects of a country they had little prior knowledge of were able to understand the system they found themselves confronted by, and seek ways to thrive under it while maintaining their distinct identity. A recent book tells the story of this meeting, and explores how the issues raised continue to define relations between the government and Alaska Natives to this day.

“The Tanana Chiefs: Native Rights and Western Law is one of those priceless history books that asks readers to not simply learn about an event, but to reconsider their understanding of both the past and present as a result." 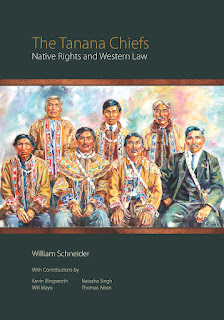