Skip to main content
August 03, 2019
In the first installment of the new series, Creating Alaska, Fairbanks author Rob McCue discusses his life, and the feelings of egalitarianism towards people from all walks that are on display in his debut essay collection, "One Water." 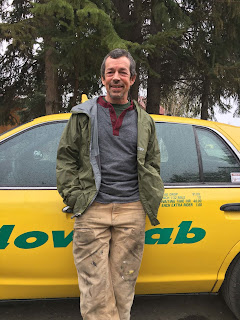 “We all come from these bizarre circumstances that nobody else can appreciate,” McCue said. “I don’t know that someone who went to college and has a good job is any more interesting than somebody that came from humble beginnings and figured out some way to get by. That is the humanity I’m trying to get at. Just because this guy lives on the street or that guy has a drinking problem, you don’t know what that person went through. You don’t know what that person’s experience was that caused them to become this person that did things this way.”

August 01, 2018
David James is an Alaskan author and literary critic whose work has been published by the Anchorage Daily News, Fairbanks Daily News-Miner, Anchorage Press, Alaska Dispatch News, and Ester Republic. He is editing a forthcoming anthology of Alaska writing.
2 comments
Read more
October 29, 2019
Jenifer Cameron, a professional artist and retired art teacher, took the time to discuss her life's work as she prepared to leave Fairbanks with her husband for their new home in Seldovia. “Everybody is an artist. When you’re creating and you’re expressing yourself and making marks on a paper and engaged in the process, that’s what artists do. I believe everybody’s creative. Our brains are built to be creative and curious. It’s hard to not be.” Read more here .
Post a Comment
Read more
October 29, 2019
It's not often that accounts of Arctic exploration can be described as "fun." But the story of Walter Wellman, found in the book “Flight to the Top of the World," is just that. "With its plethora of flying machines, newfangled radios, grubby mechanics, media frenzies, its Arctic backdrop, and more, this would be a great steampunk novel were it not entirely factual." Read more here .
Post a Comment
Read more