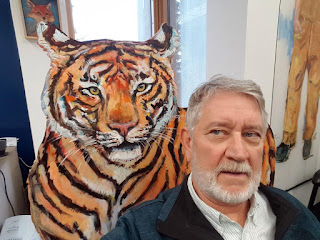 Fairbanks artist Todd Sherman creates life-size animal cutouts that he carefully paints with realistic images, lending viewers a sense that they are directly meeting the depicted creatures. Sherman talks about his work, his life in Fairbanks, and his university days in New York City here.

“My first exhibit where they were all cutouts was 10 years ago,” he said. “I had it at the Annex. I filled that whole space with cutouts. On the wall, hanging from the ceiling, on pedestals and stands throughout the room. The viewer would have to walk among all these animals. That’s kind of what I wanted.
“People think of it as artwork. But I want people to realize that these are symbols for creatures that used to be much more readily seen by our own species. But not so much now.”