Skip to main content
September 18, 2019
The fate of the Erebus – and its sister ship the Terror – has captivated and confounded nations and individuals alike for over a century-and-a-half. And then in short order both wrecks were discovered in Arctic waters during this decade. A new book follows the Erebus from the shipyard onward, touring the Mediterranean, heading southward for its years-long triumphant tour of the Antarctic coastal regions, then off in search of the Northwest Passage, where it vanished along with all of its crew in the late 1840s. The author is someone who has entertained and enlightened us for decades. 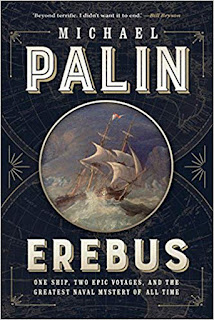 "One of the more prominent victims of Franklin Fever is Michael Palin, and for this we should be grateful. The author, television host, Monty Python alum, and all-around polymath has turned his attention to the story of the lead ship, turning out one of the most enjoyably readable books about 19th century British maritime excursions and the Royal Navy’s most famous nonmilitary failure to be had. One that will appeal to everyday readers as much as fanatics. “Erebus" is the story of a ship, of the men who sailed it, of those who were lost along with it, and of its remarkable recovery."