Skip to main content
September 24, 2019
To mark the close of their summer-long special showing of of the traveling exhibit Death in the Ice: The Mystery of the Franklin Expedition, the Anchorage Museum held a symposium featuring five speakers who shed light on what is presently known, and what new questions have arisen regarding the largest disaster in the history of Arctic exploration. The role of Inuit oral history in helping to unravel key parts of the still mysterious disappearance and demise of 129 men was the primary topic, while the increasingly apparent likelihood that some survivors returned to the abandoned vessels and made one last attempt at escape was also discussed at length. A summary of the day's events can be found here.

"Then, in 2014, the wreck of the command vessel, the Erebus, was found in Queen Maud Gulf, far to the south of where the note said the ships were abandoned. Two years later, the Terror was found, ironically enough, in Terror Bay, on King William Island’s southwestern flank. For more than 150 years it had been assumed by Europeans that the ships would be found near Victory Point. Instead they were located where Inuit at the time of the calamity said they had succumbed to Arctic waters, the places where subsequent oral Inuit history always claimed they could be found. Suddenly, it seems, the long-accepted story, based on limited physical evidence, has been upended. Assertions long deemed unreliable owing to their source have proven far more accurate than the firm beliefs of learned individuals who insisted that only physical evidence could be trusted. History is being rewritten before our eyes." 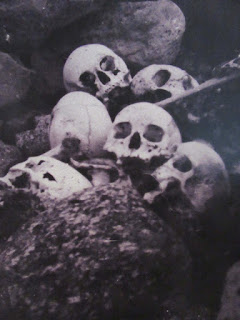