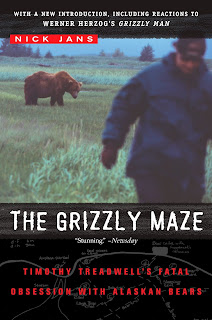 I've launched a new periodic column with the Anchorage Press called Essential Alaska Reads, where I will be revisiting older books about Alaska that still hold up well and are worth rereading, or, if you haven't read them, picking up now. First out the gate, "The Grizzly Maze" by well-known Alaska writer Nick Jans. It follows the troubled life of bear activist Timothy Treadwell, documents the circumstances that led up to the fatal bear mauling of him and Amie Huguenard in Katmai National Park in 2003, and explores the aftermath, revealing along the way that more can be learned from the tragedy than might initially appear.

"Following the attack he was savaged in the state’s newspapers, and his chances of faring well with any Alaska writer seemed even more remote than Kaflia Bay, where he died. Thus Treadwell was fortunate that the Alaskan who did chronicle his life and examine his death was the well-established author Nick Jans. In his 2005 book, “The Grizzly Maze,” Jans accomplished the difficult task of offering a sympathetic account of Treadwell the man, while harboring no illusions about the series of avoidable errors he made that resulted in the violent deaths of himself and his girlfriend, as well as two of his beloved bears during the subsequent process of recovering human remains. The book, which should have sold better than it did nationally, remains an essential Alaska read for several reasons."