Activists in Alaska are asking voters to approve the upcoming ballot measure asking if there should be a state constitutional convention. These activists seek to ban abortion under all circumstances in Alaska. This will lead to many bad outcomes for women and girls in the state that holds the shameful distinction of leading the country on sexual abuse.

If the activists get their convention and the changes they seek to the document, what happened to an impregnated ten-year-old rape victim in Ohio recently will become the norm for impregnated rape victims in Alaska: forced pregnancy unless they can afford travel Outside. This is a crime in itself equivalent to the rape, as it would place the state in the position of forcing rape victims to submit their bodies to the demands of anti-abortion fanatics. Groups leading the charge to hold the convention, such as the Alaska Family Council, ignore rampant family violence in this state. They are not serving the interests of Alaska families, they are serving the interests of obtaining political power and collecting donations. They will happily destroy the lives of women and girls in Alaska to accomplish this.

And their destruction will be felt most heavily among Alaska Native women and girls, who suffer the highest rates of abuse and who often lack the resources to fly out of state. 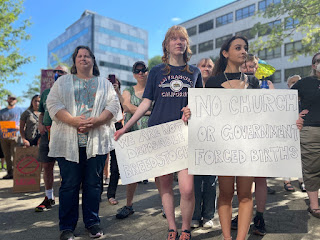 This piece has now been published by three media outlets in Alaska. The message is straightforward: Stand up for Alaska's women and girls. Vote no on the constitutional convention. Alaska's state constitution contains the most stringent privacy protections of any such document in the world, protections that protect all Alaskans on multiple levels, including rape victims dealing with the aftermath of trauma.

The Alaska Family Council and similar organizations would strip rape victims in Alaska of their right to seek medical treatment. Only with a resounding no vote can actual Alaskans make it clear to groups like AFC, which do not hold Alaskan values, that we will not let them dictate the health and well being of rape victims.

That it is even a possibility that they could is appalling to basic morality.

August 01, 2018
David James is an Alaskan author and literary critic whose work has been published by the Anchorage Daily News, Fairbanks Daily News-Miner, Anchorage Press, Alaska Dispatch News, Alaska Pulse, Alaska Magazine, and Ester Republic. He is editing a forthcoming anthology of Alaska writing.
3 comments
Read more
October 29, 2019
Kendell Macomber discusses aerial dancing,which she practices and teaches in Fairbanks, and her pathway into the Fairbanks professional dancing world, where she is a prominent contributor. One day I saw aerialists, and I said, that’s the next level; I have to do that. So I got up in the air and haven’t looked back.” Read more here .
Post a Comment
Read more
September 09, 2018
An Inupiaq photographer brings the world face-to-face with Alaska's northernmost residents . "Since 2015 he has been operating a website called "I am Inuit" where he presents photographs of Inuit people from across the western and northern regions of Alaska, along with short quotes where they offer thoughts on their lives. It's akin to the popular Facebook page "Humans of New York," but focused on the Native people of far-flung Alaska."
Post a Comment
Read more